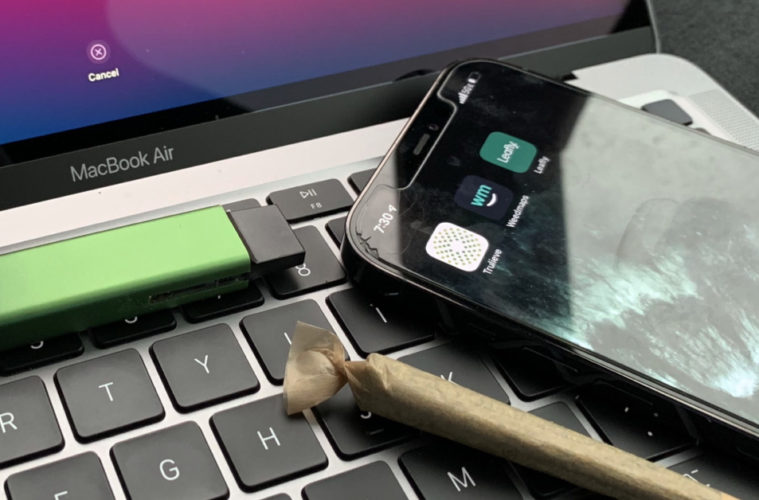 There has long been love-hate relationship between big tech, including social media, and cannabis.

Almost everyone knows of someone who went to “Facebook jail” for even mentioning cannabis. In 2019, Facebook released its artificial intelligence technology, capable of identifying images of marijuana. Their official policy continues to prohibit the commercial advertising of cannabis products, regardless of the legality of the business under state law.

Non-profit organizations involving cannabis education and advocacy, with widgets to collect funding have been blocked by folks like Stripe for disseminating information about cannabis.

Apple is waking up to the opportunities in cannabis

But things are changing. According to a memo dated June 7, Apple has stated that they will no longer prohibit marijuana delivery services from being hosted on its App Store. That is a huge shift and one of the latest pro-cannabis developments to come out of the tech industry.

The policy was updated recently to remove the ban, with some restrictions. Marijuana apps must be geo-restricted to jurisdictions where cannabis is legal, and the program must be “submitted by a legal entity that provides the services, and not by an individual developer.” In other words, the service must create the app internally, as opposed to a developer creating one on his own and looking for a service to sell it.

The previous policy stated, “Apps that encourage consumption of tobacco and vape products, illegal drugs, or excessive amounts of alcohol are not permitted on the App Store. Apps that encourage minors to consume any of these substances will be rejected. Facilitating the sale of controlled substances (except for licensed pharmacies), marijuana, or tobacco is not allowed.

“Apps that encourage consumption of tobacco and vape products, illegal drugs, or excessive amounts of alcohol are not permitted on the App Store. Apps that encourage minors to consume any of these substances will be rejected. Facilitating the sale of controlled substances (except for licensed pharmacies and licensed or otherwise legal cannabis dispensaries), or tobacco is not allowed.”

Then it states, “Apps that provide services in highly-regulated fields (such as banking and financial services, healthcare, gambling, legal cannabis use, and air travel) or that require sensitive user information should be submitted by a legal entity that provides the services, and not by an individual developer. Apps that facilitate the legal sale of cannabis must be geo-restricted to the corresponding legal jurisdiction.”

But not every big tech platform is on board. Google’s Android app hub updated its policy in 2019 to explicitly prohibit programs that connect users with cannabis, whether it is legal or not in the jurisdiction where the user lives.

“We don’t allow apps that facilitate the sale of marijuana or marijuana products, regardless of legality,” Google’s policy stated, adding that some violations would be “allowing users to order marijuana through an in-app shopping cart feature” or “assisting users in arranging delivery or pick up of marijuana.”

Google’s policy also states that, “facilitating the sale of products containing THC(Tetrahydrocannabinol), including products such as CBD oils containing THC” is against its policies.

Currently, Florida MMTC’s are using platforms like Jane to help patients order on line for pick-up and delivery.

In other states, delivery services like Eaze allow consumers to order from a number of dispensaries for delivery. Chris Vaughn, CEO of the California delivery service Emjay, recently told WeedWeek that he believes Apple’s decision was informed by the continuing legalization movement in states like New York, as well as Amazon’s recent announcement that it will no longer be drug testing workers for cannabis in addition to lobbying for a federal legalization bill.

Vaughn added that he believes Google will “follow quickly” to update its own policies.

Noncommercial cannabis news sites, and state regulatory bodies like the Massachusetts Cannabis Control Commission have also been caught up in the anti-marijuana policy despite the fact that they do not promote or sell cannabis products. In some cases, search engines have hidden them from appearing in search results—a practice known as “shadowbanning.”

Even though marijuana firms are being banned from Google’s app market, some of Google’s top officials seem in favor about loosening cannabis laws. Google co-founder Sergey Brin joked about supplying employees with joints at a post-election meeting in 2016.

“I was asking if we could serve joints outside on the patio, but apparently these things take a little while to take effect,” Brin said, referring to the implementation of California’s cannabis legalization measure. “It was a huge, huge disappointment. I’ve been bemoaning that all week, I’ll be honest with you.”

Eventually, we may all be on the same page, but for now, the score is Apple-420, Google-zero.