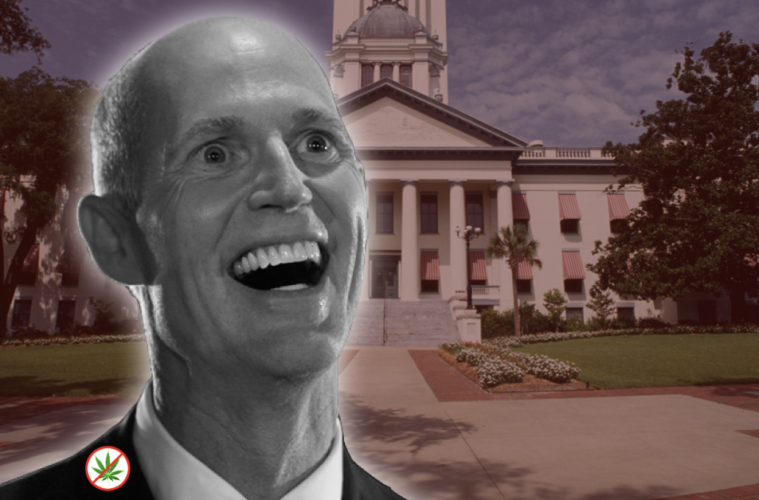 On Friday, with just a few hours to spare until deadline, Governor Rick Scott through his administration, filed a notice to appeal a Tallahassee judge’s order that rejected a 2017 medical marijuana law as unconstitutional.

“The governor has directed the Department of Health to appeal this ruling after hearing from the Legislature, which is responsible for creating laws, not the judiciary,” Scott spokesman John Tupps said in an email Friday afternoon.

In August, Circuit Judge Charles W. Dodson gutted the state law on medical marijuana, revealing major provisions to be unconstitutional based on the constitutional amendment which was passed by voters in 2016 allowing medicinal cannabis.

Dodson’s decision came in a challenge filed by Tampa-based Florigrown LLC, which was denied a license by the state, according to Floridapolitics.com.

The current Florida laws do not support what was voted into law by the voters.

“The constitution is a limitation on the power of the Legislature. Consequently, a statute enacted by the Legislature may not restrict a right granted under the Constitution,” Dodson stated in his written order. “The court finds Florigrown has a substantial likelihood of success in its claim that Section 381.986 arbitrarily caps the number of MMTCs , in conflict with the amendment.”

On Oct. 5, Dodson gave the Department of Health two weeks to register Florigrown and to begin registering other medical marijuana operators, or risk being found in contempt of the Constitution.

“Our position has always been that Gov. Scott and the Legislature created a cartel here in Florida rather than a medical marijuana program for the patients. This is what a cartel looks like,” Eland told The News Service of Florida.

The cannabis industry is stable, successful and thriving in Florida.

According to the Florida Department of Health, as of Oct. 19, 2018 there are 137,470 qualified patients in the state. From Oct. 13 to Oct. 19, 33,099,343 mgs. of Medical marijuana were dispensed; 1,512,483 mgs. of low-THC cannabis was dispensed. There are currently 64 approved dispensing locations. The DOH also reported that there are 19 cases of litigation involving the implementation of Amendment 2 including the “no smoke ban” and the ban on patients growing their own cannabis.

The Orlando Sentinel reported in April that the state “doesn’t track sales figures.” Trulieve, a Florida-based cannabis company operating 16 dispensaries and 468,000 square feet of cultivation facilities, reported Q2 profits of $23.2 million. Additionally, it has been reported by analysts that the continual profits signify that the entire Florida cannabis industry could yield an estimated $1 billion annually by 2020. The actual figure could exceed projections if additional licenses are granted according to the Constitution.

Medicinal cannabis is legal in 30 states and recreational (adult use) is legal in nine states. On Wednesday, Canada became the second nation in the world with countrywide adult-use legalization.

According to the Associated Press article “After Canada legalizes pot, industry eyes rest of world,” cannabis entrepreneurship in the United States fails compared to Canada. Their success, the article states, may hinder the U.S. cannabis market.

On Tuesday, Derek Peterson, chief executive of Terra Tech, a California-based cannabis producer, took out a full page ad in the Wall Street Journal pleading to President Trump that the “American cannabis industry represents an extraordinary economic opportunity for our country, yet Canada is threatening to deprive American farmers, workers and businesses from the prosperity the rightly belongs within our borders,”

“The legal cannabis sector has proven its ability to stimulate our domestic economy and provide well-paying jobs to Americans in numerous states from coast to coast. Data from legal states also shows a reduction in opiate abuse and associated overdoses.” Peterson added.

The cannabis industry provides jobs which helps grow Florida’s economy. This type of economic stimulation can be stifled by litigation which is encroaching on tax dollars which ideally should go towards inflating the state’s most promising industries.