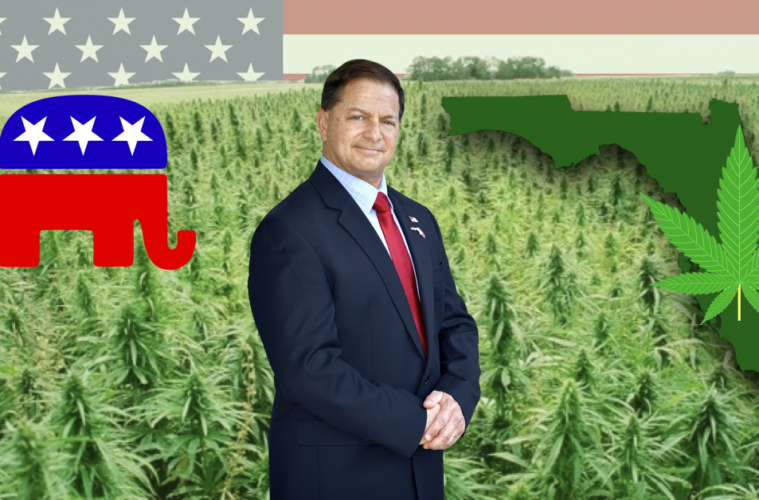 As things continue to progress in the Florida Governor race, it’s looking like Cannabis may very well be the #1 voting issue in this election. The controversy surrounding the Joe Redner case as well as John Morgan calling out Rick Scott and most importantly, over-regulation on Amendment 2 which has been carried out by the Florida Department of Health.

Normally when people think of “pro-cannabis” political candidates, they think of Democrats, Libertarians, Socialist & Independents. In our culture, the word “Republican” or “Conservative” don’t usually mix with Cannabis because in past generations they have subscribed to the lie which was propagated by the establishment that Marijuana is somehow a “gateway drug.”

That is until now…

The only non-career politician rising star on the Republican ticket Bruce Nathan for Florida Governor just went on record in a recent Republican debate that he supports Regulated Adult Use (i.e, legalization) in the State of Florida.

Yesterday, Bruce when on the record & told Canna Chronicle…

“When I’m elected Governor if a bill for adult use comes across my desk, I’ll sign it! I’m for a free market, a more robust medical program with less red tape and also regulated adult use. What the Florida Department of Health is doing to our patients is truly a crime against humanity. We don’t have time to allow our leaders in Florida to obstruct an industry that the voters obviously want. People are dying from opiate abuse daily which is why we can no longer afford to prevent this God given plant from being used the way it was meant to. I will also bring the industrial Hemp industry to Florida which will create countless jobs which will revolutionize our States economy!”

Bruce is currently the only candidate with a stance this bold on a normally “left-leaning” issue which is surprising… especially to certain people in his own party.

He could steal votes away from front-runner Adam Putman because it’s no secret that his special interest isn’t exactly thrilled with the idea that our Medical Program (Amendment 2) as already passed.

In an interview with NBC (which you can see in the clip below) Mr. Putman told reporters…

“I think Amendment 2 should be narrowly implemented.”

…which many people believe is code for, ‘I oppose the will of the people passing Amendment 2, because it conflicts with my big donor supporters in the sugar and opioid industries, so I plan to fight it all the way, and if that means people who need medical cannabis can’t get it and will suffer or must turn to opioids, too bad for them.’

It’s very evident that his campaign doesn’t want to talk about this issue (The Putman campaign has refused to give Canna Chronicle any interviews or quotes on this subject & we’ve contacted their campaign on more than one occasion). It’s a widely reported fact that his campaign has received contributions from special interest donors from the pharmaceutical and sugar industry.

“Putman’s in bed with the sugar industry which is a direct competitor to Cannabis and let’s not forget also Hemp which has many industrial uses (which when implemented correctly) could Make Florida Great Again! Sugar also causes all kinds of environmental problems with algae in our State and everyone knows too much of it isn’t good for anyone. Putman could single handily destroy BOTH our State’s environment and economy in one effort, if he’s elected in just his first term. He’s a really nice guy (like Jeb Bush, who Putnam supported against Trump), but doesn’t know what he’s doing, and like Trump said, ‘We don’t need ‘nice’ we need ‘tough’ and ‘smart’’.  If you want nice, I’m not your guy, if you want TOUGH on corruption, crime, and career politicians, and SMART pragmatic problem solving and policy implementation, then I’m your guy.”

Nathan went on to say…

“I’m for common sense pragmatic adult use. I don’t want Florida to be a ‘marijuana madhouse”’, which is why I’m against smoking it in public. People should be able use this God-given plant responsibly in private, and this is just one component of my larger plan to eradicate opioid addiction.  Sure, the sugar and the opioid industries are going to hate me, but I don’t give a S&*#T. ”

As the self-proclaimed “Law and Order Candidate”, Bruce then added that Cannabis (and also it’s close cousin Hemp) could completely transform our Florida’s economy and drastically reduce crime…

“Not only do the big sugar and opioid industries benefit from opposing cannabis use…  You know who’s benefiting the most from this problem? Unfortunately it’s Mexico.  It’s no secret that the Cartel distributes most of Florida’s Marijuana thru the black market. How does that help our State? It doesn’t! That is all money leaving our State and benefitting Mexico when the alternative is we could legalize, regulate and tax the plant which will create more legal jobs for our economy and the tax revenues alone could completely transform our education system and provide funding to help pay retired, armed Veterans to protect our children in ALL of our schools. I really can’t believe that the our leaders haven’t done this by now. It’s almost as if we’re living in the dark ages.  I want Florida citizens to have access to the medical benefits of cannabis AND keep the money it generates here in the state. THAT is putting Florida First!”

With the Republicans trying to figure out which candidate they want to get behind it will be interesting to see how this controversial move by the Bruce Nathan For Florida Governor campaign will shake up this race.

For more information about Bruce Nathan and his stances go to www.BruceNathan2018.com.