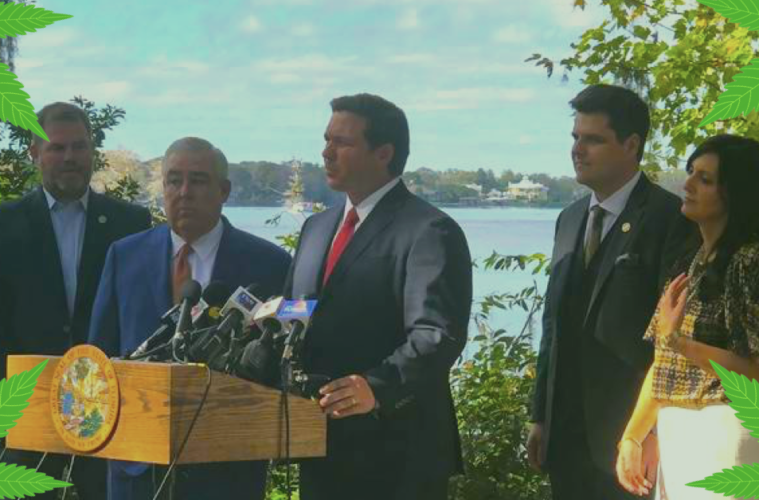 Last week Governor Ron DeSantis, surrounded by a number of high-profile cannabis influencers, announced that if legislation surrounding Amendment 2 does not change by mid-March he would take action himself.

The State of Florida, under the direction of former Governor Rick Scott, has been involved with several appeals regarding recent rulings made by Tallahassee Circuit Court Judge Karen Gievers. Last May, Gievers determined that the state’s ban on smoking medicinal cannabis was unconstitutional and had the ban overturned. However, the State’s Department of Health immediately filed the appeal that patients have been fighting ever since.

With pressure mounting from both sides of the political aisle to intervene in this matter, Governor Ron DeSantis publicly addressed the issue. DeSantis was joined by congressman Matt Gaetz who helped pen one of the original CBD bills, his Lieutenant Governor Jeanette Nunez, and one of the founders of Amendment 2 John Morgan, showing a united front in favor of complying with the will of Florida voters.

DeSantis was quoted saying, “What the Florida Legislature has done to implement the people’s will has not been done in accordance with what the amendment envisioned,” adding, “Whether they [patients] have to smoke it or not, who am I to judge that? I want people to be able to have their suffering relieved. I don’t think this law is up to snuff.”

Smoking medical cannabis isn’t the only appeal Florida is dealing with at the moment, DeSantis indicated that he also plans on dropping the State’s involvement in the vertical integration and limited licensing appeals. As it stands, Florida Medical Marijuana Treatment Centers are responsible for each step their product takes from farming, cultivation, and processing, all the way to marketing and selling. This is a major stressor on streamlining the cannabis life-cycle as well as making it difficult to ensure quality. Also, with only 14 licenses made initially available, there is no room for competition and puts an enormous share of the market into the hands of a few powerful people.

Although he was absent from this meeting, Florida Senate President Bill Galvano released a statement mentioning, “A legislative solution has always been my preferred course of action … Many Senators share these concerns and have ideas they are interested in advancing, which include smokable forms of treatment. I look forward to continuing those important discussions in the coming weeks.” This indicates that the Senate intends to comply with the governor’s request and readdress this hot-button topic. DeSantis did make it clear that if the legislature moves too slowly, he will step in and completely remove the state from these appeals.

The governor is already trying to prove that actions speak louder than words with some major decisions coming from his office in just the first week. DeSantis has appointed three new Florida Supreme Court Justices and unveiled an extensive $2.5 billion to combat major issues facing Florida’s waterways.

The governor put it simply saying, “We have a lot of fish to fry in Florida,” and “The last thing I want to be doing is cleaning up something that should have been done two years ago. I don’t want to continue fighting some of these old battles.”

Nearly 20 lawsuits are still active regarding Florida’s cannabis industry, mainly from business trying to get their hands on one of the rare licenses available. John Morgan, however, says his fight is “finished” and now only hopes people will be able to access their newly legal medication through their insurance policies, making it more affordable for low-income patients.

“When there’s insurance for medical marijuana, that’s when we’re really going to put a dent in the opioid and Oxycontin industry,” Morgan commented, “My battle will continue against the opioid industry in court.”

Currently there are over 150,000 patients in Florida who qualify for Medical Marijuana with just under 2,000 physicians available to write those prescriptions, but there are only 83 dispensaries capable of selling the product. Increasing the availability of licenses will give more companies the ability to treat patients more conveniently, as well as giving patients more options on where to purchase.

Gaetz, a top transition advisor for the governor’s team, also had this to say, “The structure that I largely built is one that I can no longer defend,” this in regards to the Charlotte’s Web or the Compassionate Medical Cannabis Act. “It’s how we had to do it to get the votes. I’m grateful that we have leadership that is going to put the patients and the will of the people first.”

New Agriculture Commissioner Nikki Fried thinks that mid-March is too long for these changes to begin in Florida. Fried heavily campaigned under the notion that she would help expand the cannabis industry and give patients more access to their medicine.

She commented, “Every day that medical marijuana in the pure plant form is unavailable to patients, Floridians continue to suffer … this is an issue I’ve seen firsthand throughout our state and country, and one that touches my family personally — my mother was recently diagnosed with cancer, and she is struggling to find medicine that relieves her suffering. The fact that she can’t access the medicine she needs breaks my heart.”

Fried has been calling politicians out on these practices since the initial ban began under Governor Scott. She recently made a video urging new governor DeSantis to succeed where his predecessor failed.

Another proponent of altering the state’s current cannabis practices is State Senator Jeff Brandes who not only wants to increase the number of available licenses and eliminate the vertical integration requirement, he also says not allowing patients to smoke has gone on long enough.

“What other drug does the government tell you how to ingest?” questioned Brandes. “It’s a doctor-patient issue. The government doesn’t insert themselves in there.”

A long time medical marijuana advocate, Sen. Jeff Brandes also believes the state should already be preparing for what many see as the inevitable introduction of recreational cannabis.

This marks a significant turning point in Florida’s cannabis industry. While Governor DeSantis is urging the legislature to make changes to the state policies, we will have to wait and see how soon these changes are made, and what the changes will be. Voters, patients, doctors, and politicians are all eagerly looking forward to the next step in Florida.