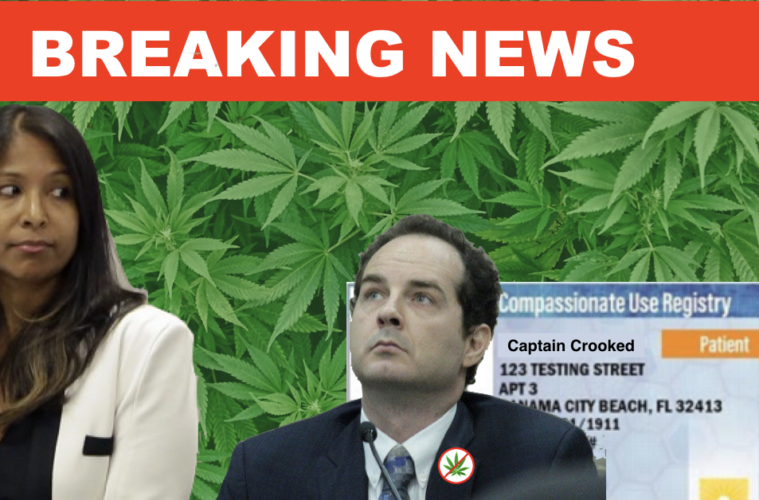 As of November 21st, after only 10 months since the new law took effect, over 63,000 Floridian patients have registered to get their Medical Cannabis cards. That’s more patients than the entire state of Oregon registered in the 20 years that have had legal Medical Cannabis.

The state had only issued just over 30,000 cards. And Florida’s citizens and part-time residents are mad. Many of them are terribly ill, suffering and dying while patiently awaiting their cards so they can get the medicine that is now their constitutional right.

The Surgeon General of Florida was getting impatient, too.

The OMMU is not doing their job.

The Department of  Health’s Office of Medical Marijuana Use, led by Christian Bax, had been coming up with more excuses than progress in solving the problem. In several presentations to the Florida House and Senate, Mr. Bax has claimed that the wait time is about 30 days. Tens of thousands of patients would disagree. Bax claimed that at any one time, 3000-6000 patients are in que, and blamed the fee processing service, his office’s card-producing system, and lack of personnel. The legislature demanded that he outsource the card production. After long-standing delays, he finally moved forward to implement a “Intent to Negotiate ” process to award a contract, and the contract was awarded to Jacksonville based Veritech Solutions, and female-owned and operated company, with their $7.2M bid. The company with the highest score but a bid over $2M more than Vertitech, Automated Health Systems(AHS) filed a complaint, claiming that Bax improperly followed the rules and procedures of an ITN.

Normally, that wouldn’t make any difference. “We get sued all the time!”, noted Sen. Dana Young, as she scolded Bax for missing deadline after mandated deadline.

Maybe it had something to do with the fact that AHS spent more money on lobbying the executive branch than almost any other company in the last quarter, at $155,000. Whatever the reason, Bax declared that he would not award the contract until the legal process begun by AHS, complaint went through, which would take until at least February if it ran on schedule. That meant that the burgeoning number of patients, now climbing almost exponentially, would have to continue waiting months instead of weeks for their card, and blocking thier access to life-saving medicine.

Surgeon General Celeste Philip, the strong leader of the DOH and the person that hired Bax without any competition at the insistence of the Governor, had had enough. She stayed silent when it was revealed that Bax’s resume was augmented and contrived by his sister, Laura, who works in the governor’s office.

But this time, she could not stay silent.

Citing emergency powers, she opted to push Bax aside and override his decision to do nothing, “to avoid an immediate and serious danger to public health.”

Under Philip’s order, the outsourcing will begin while the administrative challenge moves forward.

Speaking for the Surgeon General, spokeswoman Mara Gambineri said in an email, “We have heard the concerns of patients, caregivers and the Legislature and have determined that expediting the OMMU (Office of Medical Marijuana Use) identification card program is necessary to ensure timely access for patients. The rate of growth of this program has proven that we cannot wait for an ITN (Invitation to Negotiate) protest without impacting patients currently suffering from qualifying medical conditions.”

Bax’s lack of leadership has shown delays in multiple mandates, including producing rules for edible standards, pesticide use, MMTC license renewals, labeling and packaging standards, dosing guidelines and testing laboratory certification. This week, after eight months, Bax’s group released the four-paragraph rules on pesticides, which will not become effective until March to allow the MMTC’s to comply. That means that any unscrupulous MMTC growing facility could use any pesticide if it wanted to, while the OMMU procrastinated.

That’s not what we expect from a regulating agency, and I’m sure that SG Philip doesn’t either.

Maybe her next action will be to remove Bax from office.

That would be a positive move for Floridians.