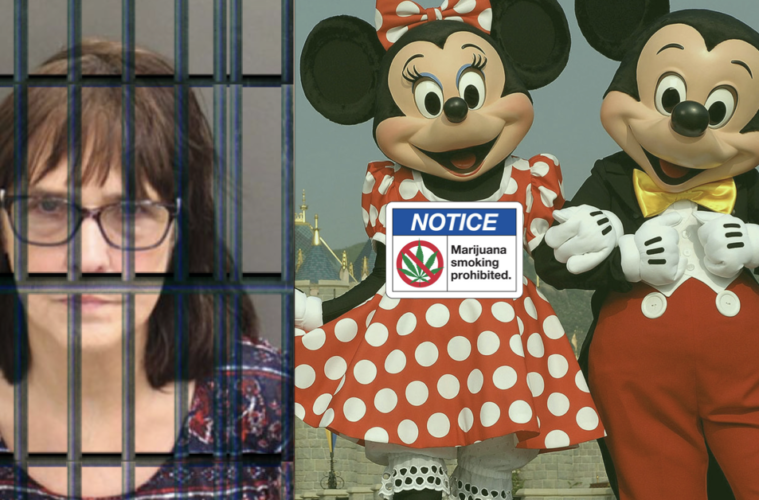 Burkhalter was going through a routine security checkpoint when one Orange County Deputy discovered a bottle of CBD oil in her purse. This started a domino effect of legal problems for the North Carolina woman.

She explained that she started using the CBD oil because her doctor had recommended it, and even went so far as to provide a note explaining his recommendation. This did nothing to deter deputies from detaining Burkhalter, who ultimately spent 12 hours incarcerated before posting a $2,000 bond.

It was reported that for the past two years Hester has been planning this trip. She commented, “I have really bad arthritis in my legs, in my arms and in my shoulder … I use (CBD oil) for the pain because it helps.”

After being arrested she mentioned, “I’ve never had one speeding ticket in my life.” Now she was faced with the possibility of facing felony charges in Florida.

A major problem facing Floridians (and visitors to the state) is the contradictory nature of the existing cannabis legislation. While CBD oil is readily available and sold in hundreds of stores across Florida, it’s technically illegal to purchase/consume/possess the oil unless the user has a cannabis prescription. This technicality is leading to real problems, as evidenced by Burkhalter’s experience.

Burkhalter’s attorney, Jennifer Synnamon, reached out to Fox 35 and said, “a little drop of oil, with the CBD, is a felony. Meanwhile, you can have up to 19.9 grams of leaf-marijuana, and it’s a first-degree misdemeanor.”

These confusing policies are just the tip of the iceberg in Florida’s cannabis industry. Issues with licensing, THC caps, Vertical Integration, and of course criminality are becoming larger and more difficult as more time, and more legislation are passed.

The Orange County Sheriff’s Office released a statement defending their deputy as they were simply following the law, however the charges against Burkhalter have been dropped.

Attorney Jennifer Synnamon concluded her statements with this:

“I’m very disappointed that the Orange County Sheriff’s Office handled the situation the way they did. Why Sheriff Mina would support his deputies using their resources for a CBD oil arrest of a 69-year-old woman, but then won’t do anything about the gas stations, health food stores, drug stores, etc. that are selling it to the open public is absolutely beyond my comprehension. The State of Florida finds nothing wrong with collecting the sales tax on illegal products, but they allow prosecution for possession of the same. I want to commend Aramis Ayala’s office for reviewing the case and swiftly determining that they would not prosecute.”

Visitors to the Sunshine State must now be even more vigilant in understanding our laws, which could detrimentally effect our tourism revenue. Furthermore, it raises an enormous red flag on the current nature of our contradictory and incomplete legislation.