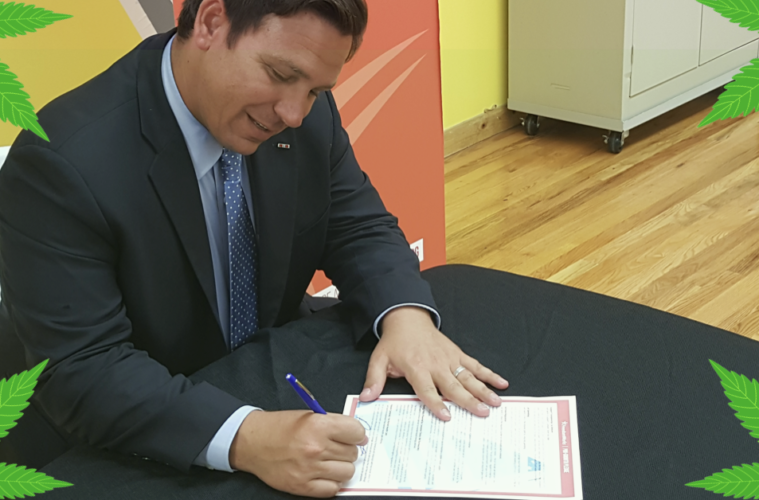 After a landslide vote of 101-11 this week in the Florida House SB 182 gets signed into law today by Governor Ron DeSantis at 2:40 PM 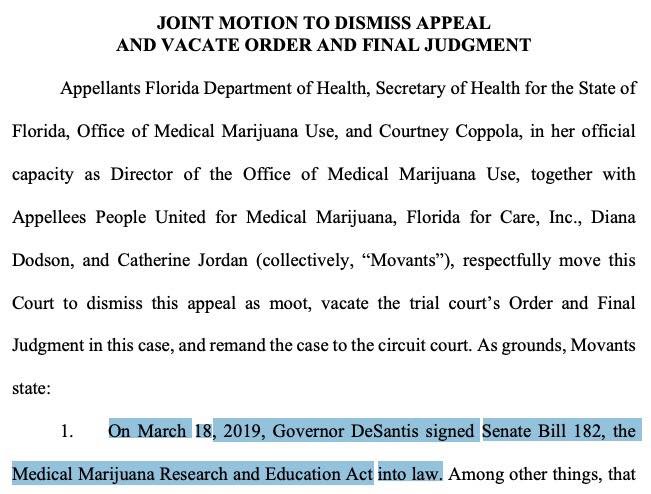 From the 1st District Court of Appeals

Earlier this year DeSantis put a deadline on this process himself by pressuring the legislature into establishing legal verbiage by March 15, the start of the legislative session. SB 182 will be the first bill of this session to be reviewed at the Governor’s desk.

This bill not only repeals the smoking ban that had been deadlocked by a state appeal, but it also allows doctors to order a 210-day supply of medical cannabis (opposed to the current 70-day limit). Other stipulations include submitting oneself for a data study on the effects of smoking marijuana, but also requires minors (under the age of 18) to be diagnosed with a terminal condition and get a second opinion from their primary pediatrician (or a secondary pediatrician) before receiving the prescription.

DeSantis commended the Legislature for their efforts via Twitter saying, “I thank the Florida Legislature for taking action on medical marijuana and upholding the will of the voters”, but until this signing had not released a formal statement. Having only 3 months in office, his administration is moving at a record pace.

House Speaker Jose Oliva commented after the vote earlier this week, “This is a difficult issue, and you’re going to have people on both sides; some that are happy that now this is available to them and others that feel that we didn’t go far enough,” adding “We did the best that we could do and still remain responsible.”

Rep. Ray Rodrigues was still not convinced, warning doctors with these remarks, “What I would say to the medical community is that it is incumbent upon them to do their jobs to treat this as medicine … The last thing we want to see is the pill mill crisis that occurred with opioids to occurring in this state with medical marijuana. So we’ll be watching.”

Stern words, although laden with traditional rhetoric, likening cannabis to opioids and implying that people are likely abusing the substance and questioning its medical validity. It is unfortunate that these sentiments are still so common when more and more medical research is being conducted showing the immense healing properties associated with cannabis in a multitude of different ailments. Advocates are encouraged to reach out to representatives with testimonials and personal experiences with cannabis in an effort to remove the stigma placed on the canna-community.

Nikki Fried, another new contender in the Florida political landscape and current Agricultural Commissioner, mentioned after the vote, “Today’s action to finally allow smokable medical marijuana brings four words to the lips of people across our state: It’s about damn time.” Fried not mincing any words also stated, “It’s long past due that the State of Florida honored the will of the people and allowed doctors to determine their patient’s course of treatment.”

Not only are lawmakers and advocates ready to welcome this new wave of products to patients, they are also excited about the possibility of bringing more jobs and increasing Florida’s agricultural potential.

Many advocates and patients are saying this is only the beginning, noting that HB 1117 has already been filed to legalize recreational, or responsible adult-use cannabis, although it has not received a hearing thus far. The bill was filed by Rep. Carlos Guillermo Smith, who also raised issues regarding affordability and law enforcement training, specifically so that legitimate patients aren’t harassed or arrested.

Now that smokable whole-flower cannabis has been approved by the Governor, law enforcement’s ability to make a distinction between medical cannabis and black market cannabis is more pertinent than ever. He says law enforcement needs real-time access to the medical marijuana registry so that patients will be treated as though they have any other prescription medication.

Many dispensaries throughout the State including the largest distributor, Trulieve, have already stated that they are ready to roll out new product immediately and that they have been waiting for this repeal for quite some time. Jennifer Houghtaling, the manager of the Saint Petersburg Trulieve dispensary was quoted saying, “We’re waiting on the Department of Health to give the go-ahead and we’re prepared, we’re ready, and we just cannot wait. We know how beneficial it is to be able to smoke the plant. We’re very excited, and our patients are as well.”

The wait is over, and patients are ready to explore many more treatment options and possibilities.

CannaChronicle’s own Mike Thompson also spoke out recently on the issue and can be seen speaking to the media in the video below: