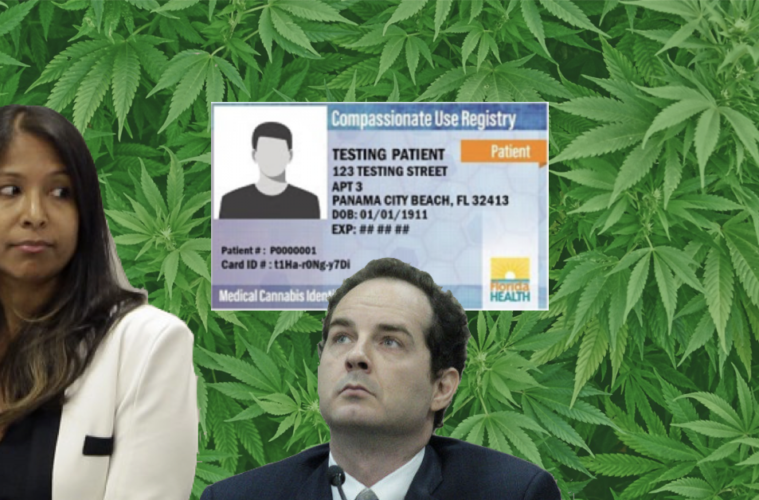 The Office of Medical Marijuana Use (OMMU) and its director, Christian Bax, has had a rough few weeks.

They have been chastised for things they could have prevented but didn’t.

But there is one question that Mr. Bax refuses to answer, and his refusal is baffling and disconcerting.

The OMMU has been king enough to give us weekly updates. Each week, it displays, among other things, the number of patients put into the registry by their physicians, who were paid anywhere for $15.00/month in payment plans to $250 to get their certification. The updates also showed the number of medical cards issued and the number of people in “the Cue”(currently awaiting approval after applications were submitted.) 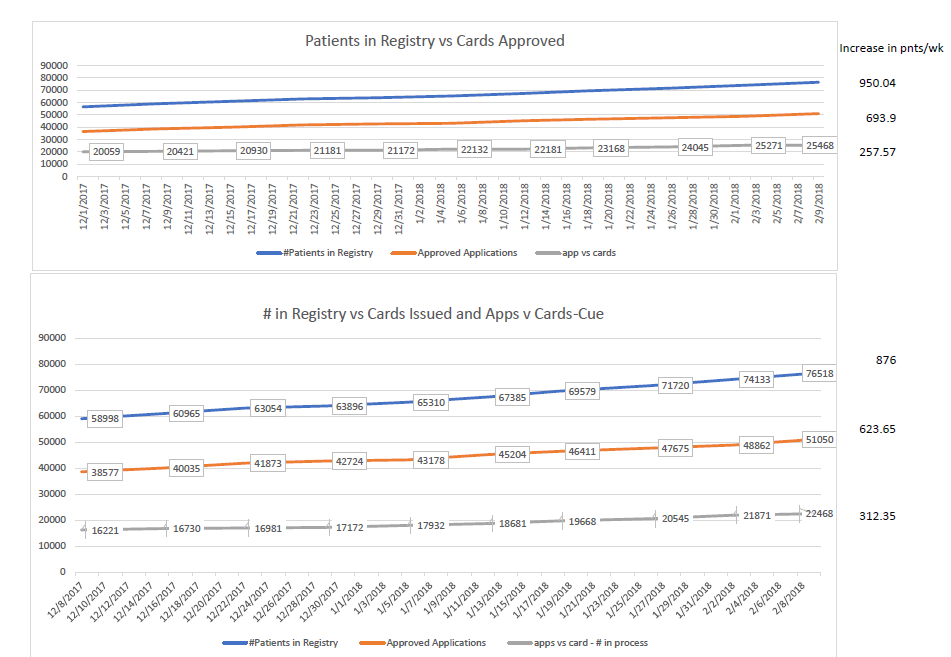 However, in analyzing those number over time, a problem appears. Since 12/8, updates have been putting in a number each week, always in multiples of 100, how many are in cue. Previous reports only gave a range of 3000-4500. Look at the graphs above. The top one shows the number of people in the registry since the beginning of December, the number of cards issued and the difference between those numbers. The bottom one substitutes the raw difference with a number that removes the number of people in the cue from the equation.  As you can see, that last number, which averages around 20K, has been increasing by 312 patients/week. I have heard the term “in-actives” for this growing segment.

So, over 20,000 people paid hundreds for their doctor visits, then never bothered to send in the $75 and their application to get their card? That doesn’t seem likely. It is possible some may have died. We know, from talking to several MMJ doctors that people have died waiting for their cards. There is word that people are not being renewed in the registry after the first 70 days recommendation, meaning that they are unknowingly at risk for arrest for holding product with an invalid card.

Last week, after a particularly contentious meeting with the Joint Administrative Procedure Committee (JAPC), one person innocently asked Mr. Bax and his crew to explain what was happening with these “inactives”. “Don’t answer that question!” he shouted, in a voice that could easily be heard down the hallway. I have a feeling that the volume of his voice ad the terseness of his answer surprised many people in that area.

What are you hiding Mr. Bax?

Even before session. Bax had been making presentations to the Senate Health Policy Committee and House Health Quality Subcommittee, and they were not happy with the results.

Since October 3, when the OMMU was supposed to have started the application process for new licenses and missed the deadline mandated by SB8A, the bill to implement Amendment 2, questions have been raised about the ability of Bax and his office to do their jobs. However, each time, they have come up with an excuse and a scapegoat for their inadequate actions.

In front of Sen. Dana Young, Bax stated that the deadline was missed because of a pending lawsuit that was about only one of the new MMTC slots. Smith v DOH was questioning the legality of demanding the membership of qualified applicant in the Black Farmers and Agriculturists Association(BFAA) as a qualifying condition. “We get sued all the time! That doesn’t mean that you can take it upon yourself to miss a mandated deadline!”

In front of the House Quality Subcommittee, Bax told them that one of the reasons that people had been waiting several months for their medical cannabis cards was that they could not accept on-line payments, so all checks and money-orders needed to be verified. He claimed that the approved vendor for on-line payments refused to do what was mandated in their contract because his office dealt with cannabis. Chairman Jaime Grant noted that this should not have been the case, since they were collecting for a license, just as if they were paying for a fishing license. Bax deferred to the new vendor about to be announced for the issuance of medical cards. But then he held back the awarding of the contract, due to another legal challenge. Surgeon General Celeste Philip, citing that the delay in medical cars was causing a “public health crisis” decided to overrule Mr. Bax and award the contract.

The tipping point for OMMU and the Legislature – the JAPC

OMMU was also supposed to be writing the rules and regulations, as mandated by SB8A and previous laws for everything from labeling to pesticide use, and fines and punishment. However, the rules he wrote, according to the Joint Committee on Administrative Procedures(JAPC), were not written with the proper authority, conflicted with current Florida Statutes, and  not did he even submit them to the Florida Administrative Registry correctly. In doing so, Mr. Bax was acting as modifier of the constitutional amendment, like he was writing his own laws, as opposed to right the rules and regulations to comply with the statutes. From Oct 3 to Feb 2, 15 letters were sent to OMMU citing the errata, some being 10 -15 pages long.

Each letter was left unanswered until Bax was brought before the committee, which usually does not even need to meet during session normally. The Joint committee decided to give full objections to the 4 sets of Rules that OMMU produced. To open the session, the Committee Chair, Sen. Kevin Rader, read a letter from the Department of Health’s general counsel, which stated that the committee’s objections might cause more delays with the next application cycle and some regulations, making the JAPC the OMMU’s new scapegoat for not getting things done. “Frankly, Chair Rader stated, “I find this statements disingenuous and insulting to this committee. The Department has known about these concerns since October 9th, and has done nothing to address these issues for four months, and has the audacity to blame our committee and staff…It is consistent with the strategy of the department to blame the the implementation of Amendment 2 and SB*a on anyone but themselves.”

After each rule was brought up and the objections stated, that asked Mr. Bax to come to the podium and explain why the previous letters had not been answered and the mistakes not been corrected. In each of the four rule hearings, Bax sat quietly in the back of the room and did not speak, even though he was called by name from by the chair. Mr. Bax finally spoke in a presentation after the four objections were voted on, and basically stated that he “plans” to respond within the required 30 days. Sen. Rader and the committee noted that they felt insulted by Bax’s attitude, and Sen. Rader called out Mr. Bax’s problem as “incompetence going on.”

The Legislature is ready to pull the purse strings on the DOH.

Prior to the JAPC meeting, Rep. Jason Brodeur had recommended that $2.1 million be held back in salaries in the OMMU and the DOH, including the Surgeon General. After the JAPC, Sen. Bradley concurred with that idea, stating that the Senate was willing to consider that measure. Sen. Bradley noted, “I think there’s an element of disrespect that was demonstrated this past week by the way the department handled the questions that were rightfully put to them by the House and Senate.”

Your under the virtual gun now, Mr.Bax. What about the “inactives”? What are you hiding from us?