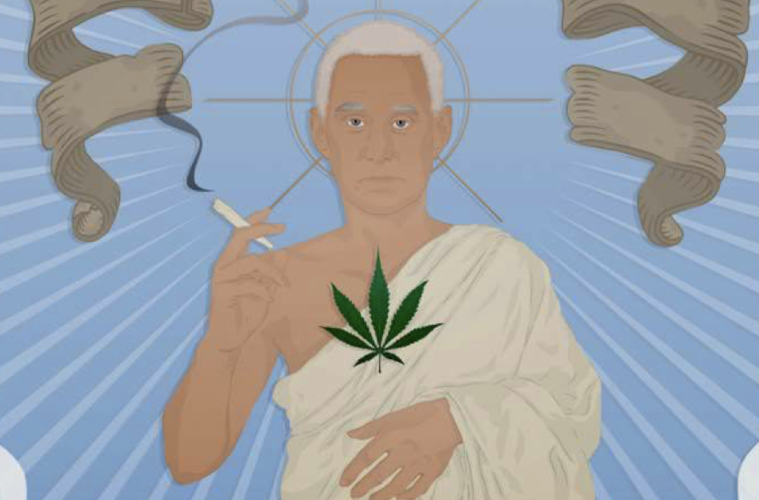 The U.S. Drug War and Cannabis Prohibition Are About to Get Stoned

The U.S. Drug War and Cannabis Prohibition Are About to Get Stoned

Love him or hate him, Roger Stone has proven to be a remarkably intuitive, prescient and influential political force, perhaps the most under-rated and under-credited figure in American politics today.

Stone’s singular style of successfully playing hardball politics, without acquiescing or capitulating to the near-universal hypocrisies, pretenses and contrivances that are practically pre-requisites to political participation at any level, has clearly distinguished him from the tiresome pack of conventional politicians, politicos and pundits who inhabit the national political scene.

In a fascinating Netflix documentary chronicling his storied career as a national political strategist and his role as Donald Trump’s most loyal, ardent and longtime political advisor (“Get Me Roger Stone”), Stone notes that any hatred towards him from opponents and critics comes precisely because he has been so (consistently and often-spectacularly) effective at what he does, to their profound consternation, if not crippling angst.

Despite the price Stone has had to personally pay in the demonization, retribution and just plain nastiness from detractors and enemies, the veteran politico nonetheless cheerfully persists as an unswerving advocate for causes he believes in and as an unrelenting warrior against outrages and corruption he sees in government and public policy.

One particular issue Stone has taken on over the last decade has confounded friends and opponents, alike, while calling on his utmost skills as both advocate and warrior. The position is both forward-thinking and for decades was considered taboo – political suicide even — so, yet again, Stone finds himself pitted against ‘conventional wisdom’ and reactionary forces that seem to perpetually-dominate America’s national political establishment.

The issue is America’s longstanding, yet long-failing drug prohibition regime, colloquially if misleadingly called the “war on drugs.”

The position Stone constantly and zealously advocates is that America’s 46-year old drug war is an “expensive, ignominious and racist failure” that must be ended immediately, with its countless incarcerated casualties set free.

Knowing what a monumental and long-term undertaking this will be, Stone wisely-focused his near-term efforts on ending one particular facet of the drug war— the prohibition of cannabis or, as anachronistic federal drug laws call (and spell) it: “marihuana.”

Those of us who have long shared Stone’s position on the issue, and who know Stone’s capacity for achieving unlikely success in highly-challenging political undertakings, are extremely pleased to have him as an active ally and equally-hopeful that his involvement might actually tip the scale in favor of finally removing cannabis prohibition from U.S. federal law entirely.

From the first days of Donald Trump’s campaign for president, Roger Stone was a consistent, if lone, voice among Trump’s top advisors urging the candidate to embrace the prerogative of the more than two dozen states that, in some form or another, adopted medical cannabis laws, and if elected to continue the existing DOJ policy, defined in the so-called Cole Memo, of federal forbearance from enforcing federal cannabis prohibition where state-legal programs were in place.

When Trump weighed in on the issue on the campaign trail, it was clear that Stone’s advocacy paid off. Trump decidedly endorsed state medical marijuana programs, saying on August 8, 2016:

Unfortunately, after his election Trump named as his Attorney General the most anti-cannabis politician in Washington, Alabama Senator Jeff Sessions, an early Trump supporter. Sessions immediately set about signaling that there would be no reprieve for any state medical cannabis programs from possible federal drug law enforcement actions and on January 4, 2018 Sessions sent out guidance rescinding the Cole Memo. Sessions made it clear that the president’s unequivocal campaign promise meant nothing to him and that he intended to enforce federal cannabis prohibition laws.

Stone has regularly savaged Sessions over the issue since the first days of the Trump administration, regularly calling for Sessions’s resignation or firing. Stone has also repeatedly urged Trump, both publicly and in private phone consultation, to honor his campaign pledge in support of state-legal medical cannabis.

While no policy has been issued by the administration to accomplish this, notwithstanding the Sessions rescission of the Cole Memo, there have also not been any reported federal enforcement actions against state-legal cannabis activities, and a number of U.S. Attorneys announced that there would be no change in enforcement priorities from those followed under the Cole Memo.

Meanwhile, those who rely on cannabis for relief from medical maladies under state-legal programs have continued to advocate for federal reform and have coalesced a substantial congressional contingent that has introduced a number of proposals to deal with the conflict from the federal side, by legislating a federal stand-down.  Through several rounds of emergency budget appropriations over the last 6 months, medical cannabis supporters in Congress successfully renewed an amendment first enacted in May 2014 that denies funds for any DOJ enforcement activities against state medical cannabis program participants.

But some advocates were not content to wait idly for the Congress to finally catch up with what polls now show to be around 90% public support for medical cannabis and for an end to any prohibition laws contrary to medical cannabis programs under state laws.

In July 2017, a group of medical cannabis users, including Alexis Bortell, an 11-year old whose family moved to Colorado to ensure she had access to cannabis that relieved her epileptic seizures, Jagger Cotte, also a pediatric medical cannabis user, Marvin Washington, a former New York Jet, and Army combat veteran and PTSD-sufferer Jose Belen, filed a lawsuit in New York federal District Court against the U.S. Government, seeking to enjoin the feds from enforcing the law that defines cannabis as a Schedule I Controlled Substance, the most extreme and restrictive classification in the Controlled Substances Act of 1970.

The plaintiffs allege that the classification of cannabis under Schedule I is so factually contrary to the reality of the plant’s applications and uses that is not only absurd but unconstitutional. In years past, such suits had a snowball’s chance in Hades of making it past a motion to dismiss. But times have (finally) changed and it appears possible that a federal court may (finally) reflect this.

Just this past week the court heard oral arguments on the government’s motion to dismiss the suit. Comments from the bench by Judge Alvin Hellerstein have given the plaintiffs and their attorneys reason for hope that finally the asinine federal drug law treatment of cannabis will be recognized for the travesty that is has always been. The plaintiffs and their legal team are optimistic that the untenable status quo will be ameliorated by a responsible federal official with the power to grant them relief, where Congress has been grossly negligent, or just plain craven,  leaving the irrational law untouched for nearly half a century.

The 89-page complaint meticulously lays out the entire human history of cannabis use, from its earliest appearance in historical records 1000’s of years ago through the tenure of AG Jeff Sessions. A key part of the plaintiffs’ allegations involves the irrational or ulterior motives behind the federal law’s treatment of cannabis that remains the law today, promulgated in 1970 under the administration of President Richard Nixon.

And what prominent political figure today was not only alive during the Nixon administration but joined its staff as a young go-getter working with key Nixon officials throughout the period in which these drug laws were put in place? If you answered Pat Buchanan, you would be right, but the correct answer for our purposes is none other than Roger J. Stone, Jr.

Over a month before the filing of Alexis’s lawsuit, Stone executed a lengthy, detailed and thorough affidavit in which he unequivocally stated, under oath, that the insane, excessive, draconian treatment of cannabis in the Controlled Substances Act had nothing to do with any scientific or rational basis, but was a purely-political calculation to use marijuana prohibition as a cudgel against two disfavored groups: black Americans and anti-war activists.

Stone held nothing back, exposing in gory detail the nefarious machinations of Nixon administration officials in making cannabis subject to harsh criminal penalizations under the same category as heroin and LSD.

Anyone who knows anything about Roger Stone knows that he has immense reverence and affection for Richard Nixon, having become a close friend and trusted confidant of the former president from the early 1980’s through Nixon’s death in 1994. Much of Stone’s identity as a political figure is tied to President Nixon, and one of Stone’s five best-selling books is an insider’s view of Nixon’s career and many previously-unknown personal anecdotes about Nixon’s life as a globally-recognized political leader.

For Stone to step up and lay out the bare, ugly truth about what Stone has long-stated to be President Nixon’s single greatest and most damaging mistake – the drug war – is itself a demonstration of personal character, integrity and courage by Stone, who would have every good reason not to give his own contemporary critics any ammunition to tear into Stone for any reason, particularly his affection for the former president.

It could not have been easy for Stone to lay out a sordid piece of the Nixon legacy in such stark terms, choosing what is right over his own personal commitment since Nixon’s death to preserving the best possible memories of a president for whom Stone not only worked and socialized and came to know on very human level, but whom Stone also very-deeply believes has been horribly maligned and mischaracterized by partisan pygmies with shallow, cheap motives and an active animus so seething that they will never abide a balanced assessment of the nation’s 37th president.

Nixon himself would admire Stone’s principled stand and willingness to pro-actively lay aside his personal sentiments and public role as the country’s foremost historian and advocate of the Nixon legacy, in order to aid a righteous cause that seeks to smash irrational, mean-spirited, abusive laws and replace them with humanity and compassion, honoring the dignity of every individual to make their own health and medical choices, without the long arm of authoritarian government making them criminals for doing so.

If it comes to a trial, Stone may well be called to testify to the contents of his blockbuster affidavit in this case. If he does, Stone’s persuasive skills and meticulous treatment of historical events may well cinch the case for these medical cannabis patients and help to ensure that they, and every medical cannabis user across our country, finally have the justice and constitutional due that they have been cruelly-denied by heartless political bullies like Jeff Sessions and that can not be allowed to stand a single second longer than it takes to put them in their proper place in the dustbin of history.