Without doctors, certified by the state, to recommended medical cannabis to patients, there is no medical cannabis program. Doctors know it, patients know it and advocates know it. But so does the Florida legislature and the Board Of Medicine and the Board (BOM) of Osteopathic Medicine (BOOM). And the latter are using that fact to attempt to bring an end to this industry, even though over 71% of voters overwhelmingly approved Amendment 2 last November.

Attend the meeting they don’t want you to know about. 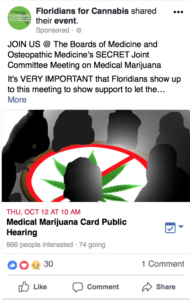 Amendment 2 was all about mandating access to this life-saving medicine to those who so desperately need it. But the legislature, whose job was to create and pass implementation bills to regulate and legitimize access to medical cannabis have been doing far more to prevent access than promote it.As of now, Cannabis as medicine in the state for Florida is burdened with more prohibtionary regulation than any other drug on the market. The only thins that come close are materials for radiation therapy and then the other controlled substances, which have a Schedule 2 rating or lower.

During the summer of 2017, the number of patients enrolled in the medical cannabis program doubled from around 16 thousand to over 32 thousand, but the number of doctors increased by less than ten percent.  And the number of actively practicing physicians continues to be less than 50 percent of all doctors certified. Why? There are 2 basic reasons. First, the Department of Health(DOH), along with the Florida Medical Association(FMA) were charged by the law defined by Senate Bill 8a, to create and implement a 2 hour certification course, to replace the eight hour course utilized since the passage of SB1030, the “Charlotte’s Web bill”. It was supposed to be ready by no later than July 1, after the governor signed the bill into law on June 23. As of today, it still is not ready for use. Doctors can still take the eight hour course, but the disclaimer on the FMA site reminds doctors that passing the $995 course is not sufficient to become certified under SB8a, and they will still have to take the two-hour course, whenever it is finalized and they pay an additional $199 for it.

But the second reason is far worse than an inconvenience of time and money. It threatens the livelihood of the doctors who put their licenses on the line to treat the patients with the debilitating conditions enumerated in the amendment.

It’s called the “Pattern Board”, and the BOM and BOOM have been tasked to create and implement it. Essentially, it allows the Boards to inspect the decision of each and every physician who certifies a patient to receive their Medical Cannabis card regarding whether the decision to certify was correct and to scrutinize the cannabis recommendation.  If they decide that a physician is recommending too much cannabis and not enough “standard analgesics” (which of course include opioids), they will start up a kangaroo court to have the physicians license to practice suspended or even revoked.

In this time of a great opioid crisis that kills 3500 Floridians each year, this is a heinous and myopic practice, and will do more to perpetuate the crisis than abate the situation.

But it lends itself to the current paradigm that far too many physicians still cling to in this age of big Pharma. The Florida legislature constantly pointed to the Pill Mill problem that our state endured to try and equivocate it to the use of medical cannabis, even though it is a false equivalency. And yet, here they go doing more to encourage doctors in non-pain clinic practice to perpetuate the problem.

During the last session, Rep. Julio Gonzales, MD, JD, filed an amendment to the developing Cannabis implementation bill. It stated that no doctor should recommend cannabis for chronic, non-malignant pain, unless that pain was refractory (or unable to be alieved) by standard analgesics. But how do you verify that the pain is refractory? You continue to increase the dose until your achieve a)a full blown addiction or b)an overdose without complete relief of pain.  When I  fully explained his amendment from the House gallery via social media  to a large group of advocates and patients, Rep. Gonzales was so besieged with calls and emails that he was forced to withdraw the amendment, even though he stated publicly that he doesn’t believe in the medical use of cannabis. No doctor wants to be known as the new king of opioid use, especially during a time when the governor and the heads of both legislatures consider the crisis as a state-wide health emergency.

And yet, here we are. The physicians of BOM and BOOM are ready and able to establish the pattern board, which insists that opioid over cannabis use is the way to go.

Quite frankly, the doctors who want to help treat their patients with cannabis as an alternative to the Big Pharma procedures that brought us to this crisis are afraid to be certified, and those who have achieved certification are afraid to actively practice. In fact many lawyers have advised their physician clients to avoid being certified because the risk of BOM/BOOM scrutiny is too high and the may lose their license to practice by following their knowledge and medical instincts in recommending cannabis for their patients who so desperately need it.

So what can we, the 71%, and those who have come to support the 71%’s vision, do to stop the development and implementation of the Pattern Boards and save the Florida Medical Cannabis program? Speak out. Tell your legislator that you’re mad as hell and you’re not going to take it anymore. That you, as a patient, a caregiver or an advocate for the patients you know and love demand that they follow the spirit and constitutional demand for access that we voted for.

Attend the meeting they don’t want you to know about.