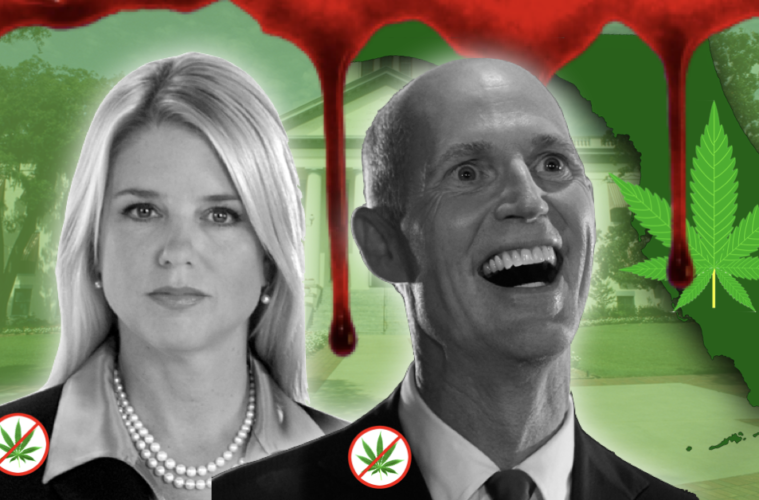 Canna ChronicleAugust 15, 2018
Uncategorized0 Comments 0
The state of Florida, as it defends an avalanche of medical marijuana cases, has spent nearly $2 million on outside legal expenses. The majority of that has gone to one law firm.
Records show that at least $1.9 million approved by the Department of Health is listed as going to two law firms: predominantly Vezina, Lawrence & Piscitelli, but also Shutts & Bowen.
The contracts, posted on Chief Financial Officer Jimmy Patronis’ Florida Accountability Contract Tracking System, or FACTS, were often adjusted for increasing amounts of money. FACTS is an online tool developed to make Florida’s government contracting process more transparent.
At the same time, Orlando lawyer John Morgan – one of Florida’s leading medicinal cannabis advocates – has urged Governor Rick Scott to drop appeals of cannabis-related rulings that went against the state. This includes one case in particular that Morgan backed, which challenged the state’s ban on smoking medical marijuana.
In a recent Tweet, Morgan urged Scott to, “Do it for the PEOPLE!”, which includes part of his firm’s slogan.
Spending large amounts of money for legal representation isn’t a surprise. Under Scott and other major Florida Republicans, the state has spent upwards of $235 million on lawyers aimed at promoting their agendas.
This doesn’t include the nearly $16 million that Florida taxpayers have had to pay in private attorney fees for opponents when the state has lost, according to the Associated Press.
Interestingly, the Department of Health’s director, Christian Bax. Courtney Coppola, deputy director will act as the interim head. The department’s general counsel, Nichole Geary, who was responsible for signing legal-work contracts, has also resigned.
A total of nearly $220,000 was paid for contracts for outside legal work on medical marijuana to the Vezina, Lawrence & Piscitelli law firm of Tallahassee as early as March of 2015.
Dahlia Barnhart, a 4-year-old with a brain tumor, and her mother, Moriah Barnhart, challenged the department in order to expedite the process for patients requiring access to low THC medicinal cannabis.
This occurred prior to the passage of the state’s constitutional amendment authorizing medical marijuana, but after legislators approved the use of low-level THC, or “non-euphoric” marijuana for use by children who are severely ill. THC is the chemical that creates the high that people experience from marijuana.
The state later expanded the use of medicinal marijuana through the “Right to Try Act,” which includes terminally ill patients suffering sever pain and loss of appetite.
The Barnharts ultimately lost to the state, with an administrative law judge finding that there were “insufficient facts … to show that the child (Dahlia) would be substantially affected.”
In a recent interview with the Times/Herald Tallahassee Bureau, Moriah Barnhart stated that “she is still getting her daughter’s medical marijuana from out of state,” and went on to say that she’s “never gotten a legal product from the state of Florida.”
In August of 2015, the same law form penned a
contract that was ultimately worth $1.275 million for legal expenses. These included reviewing and analyzing files, meeting attendance and preparation for any court filings, among others.
Furthermore, a partner in the firm – W. Robert Vezina III – is listed as attorney of record for the department in an Okaloosa County lawsuit. This particular case was regarding whether a medical marijuana license preference for black farmers should include “Native American farmers and ranchers.”
In February of 2017, the firm acquired a third contract, much like the second, worth a total of nearly $700,000.
A fourth contract found on the FACTS system shows an August 2017 deal potentially worth $300,000 for the Shutts law firm, which has an office in Tallahassee, for which the firm paid nearly $180,000.
The firm helped represent the state in a lawsuit  brought by Tampa strip club mogul and medical marijuana patient Joe Redner. He is suing the state in order to be allowed to grow his own marijuana and make juice from it. His doctor recommended fresh cannabis juice as the best way to keep his lung cancer in remission. Redner won at trial, but the state is appealing.
The firm also has connections to Governor Rick Scott: Ben Gibson, a former lawyer to the governor, recently joined the firm as a partner in its Business Litigation Practice Group located in Tallahassee.
For nearly five years Gibson served as Deputy General Counsel and Assistant General Counsel to Scott “helping advise the governor on the appointment of more than 120 judges to Florida’s courts.”