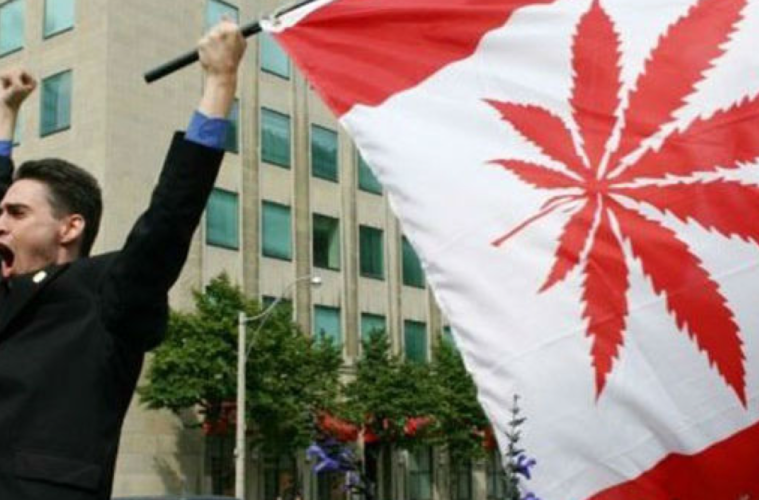 Last night, by more than a two-to-one margin, Canada made history, passing a bill to legalize recreational marijuana, which puts Canada on track to become the first G7 country to repeal cannabis prohibition.

The bill — which was introduced last April by Prime Minister Justin Trudeau’s government, passed with 200 members of parliament voting in favor of the legislation while only 82 opposed it.

Members of Canadian Parliament passed the Liberal government’s bill to legalize cannabis Monday evening, sending the legislation to the Senate for further study and debate.

“The Senate will bring its sober reflection to this bill and I think it’s really important to help us get this right,” Parliamentary Secretary Bill Blair told CTV earlier this month. “But we also expect to work as diligently as everyone else in the country has and in recognition that delay is unacceptable.”

While campaigning for legalization during the 2015 election, Prime Minister Justin Trudeau had repeatedly stressed that prohibition failed to eliminate the black market for cannabis and the status quo would not keep it away from kids. The prime minister echoed those remarks again yesterday after the bill was passed. His government expects to accomplish both of those goals through legalization, which will take effect by July 2018 if the Senate passes the measure.

Bill C-45 (‘The Cannabis Act’) would repeal prohibition for adults, setting the minimum age to buy marijuana at 18, but each province and territory will get the final say over the legal age in their jurisdiction. The bill allows individuals to possess up to 30 grams of marijuana at a time. If their province approves home grow, citizens can grow up to four plants in their dwelling.

The provinces and territories will also determine where and how dried marijuana and cannabis oil is sold in their jurisdictions. Selling cannabis edibles like brownies and cookies isn’t part of the current bill, but it is expected to be brought into the legalization framework within a year of repealing prohibition. Each region will also get to decide their own tax scheme, although the federal government plans to impose an excise tax of $1 per gram of cannabis on sales up to $10, and a 10 percent tax on sales over $10.

Bill C-45 also contains numerous penalties aimed at eliminating the black market for marijuana. Selling marijuana without a license, exceeding the possession limits, advertising cannabis and buying illicit cannabis products are all violations of the law that come with punishments ranging from fines to imprisonment. Any crime involving a minor is subject to some of the harshest punishment. Adults caught selling marijuana to minors face a maximum sentence of 14 years in prison.

Here’s the breakdown of the current state in the provinces:

Although the law isn’t expected to go into effect until July 2018, most provinces have already released draft regulations for what their regulations and retail markets will look like.

British Columbia: B.C. hasn’t announced its regulations yet, but it’s expected that they adopt a hybrid model that allows private cannabis retailers to operate alongside a crown corporation, which is the same way the province handles alcohol sales.

Alberta: Alberta plans to sell recreational marijuana at privately operated stores that will be overseen by the Alberta Gaming and Liquor Commission. The province will control online sales through a government website. The legal age will be set at 18 — the minimum age for purchasing alcohol in the province.

Saskatchewan: Saskatchewan is expected to release their regulations sometime during the winter of 2018.

Manitoba: Manitoba will also sell recreational marijuana at privately owned stores overseen by the Manitoba Liquor and Lotteries Corp. The province hasn’t decided on a legal age yet.

Ontario: Canada’s most populated province plans to open 40, provincially-operated cannabis stores next year, which will grow to 150 crown outlets by 2020. They have no plans to allow private retailers. The legal age will be set at 19, which is the same minimum to buy alcohol in Ontario.

Quebec: Le belle province plans to sell recreational marijuana at the Société Québécoise de Cannabis (SQC), a provincially-owned corporation that will be overseen by Quebec’s liquor control board (the SAQ). The legal age will be set at 18, which is the same minimum to buy alcohol in the province. And unlike other regions, Quebec plans to prohibit home cultivation.

New Brunswick: New Brunswick plans to sell recreational marijuana in provincially owned retailers overseen by NB Liquor. The legal age will be set at 19, which is the same minimum to buy alcohol in New Brunswick. The province will allow residents to grow marijuana at home, but the government’s proposed bill would require them to keep their plants and the rest of their stash locked up in a container or a room — much like with firearms.

Nova Scotia: Nova Scotia plans to release their regulations by the end of 2017.

Prince Edward Island: PEI plans to review input from the public and local stakeholders while developing regulations over the winter of 2018.

Newfoundland and Labrador: Canada’s easternmost province plans to license private retailers that will be regulated by the Newfoundland and Labrador Liquor Corporation (NLC). People living in remote regions of the province will also be able to purchase recreational marijuana online or at select NLC locations. The legal age will be 19, which is the same minimum to buy alcohol.

Yukon: The Yukon plans to have at least one, provincially run cannabis store open for business by July 1, 2018. But most Yukoners will likely have to order their cannabis online. The territory’s government plans to oversee the importation, warehousing and transportation of marijuana, but they are considering allowing private retailers to distribute it alongside a crown corporation. The legal age will be set at 19, which is the same minimum age to purchase alcohol.

Northwest Territories: The Northwest Territories plans to let individual communities decide whether to uphold or repeal marijuana prohibition through public plebiscites, which are also used to determine whether or not to allow alcohol in their jurisdictions. Retail sales will be handled by the NWT Liquor Commission, which will stock marijuana alongside liquor at outlets while offering an online mail-order service for remote regions. The legal age will be 19, which is the same minimum for purchasing alcohol in the territory.

Nunavut: Nunavut has also finished their public consultations but draft regulations haven’t been released yet.

Not bad, neighbors of the Great White North. Not bad at all.