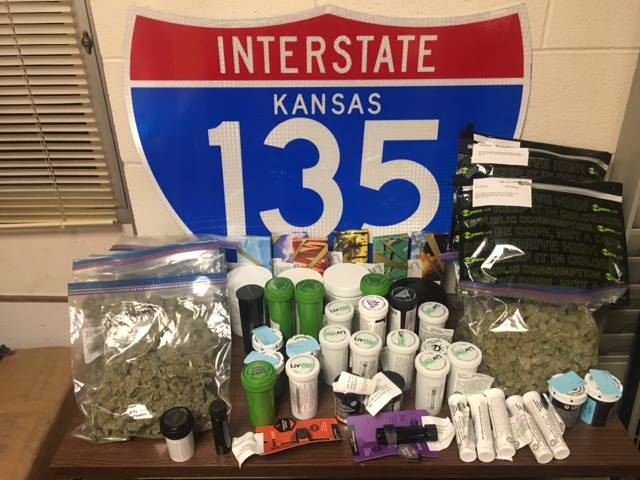 The Harvey County Sheriff’s Office posted a picture to Facebook of what they say is over $4,000 worth of “illegal drugs” that they seized in a traffic stop on I-135. Then the internet showed up. From what can be ascertained by the photograph, the seized drugs are actually just marijuana products likely purchased legally in Colorado. Of course, these items are still illegal according to Kansas law, but, by all indications, the majority of the people in Kansas are not supportive of this costly prohibition. 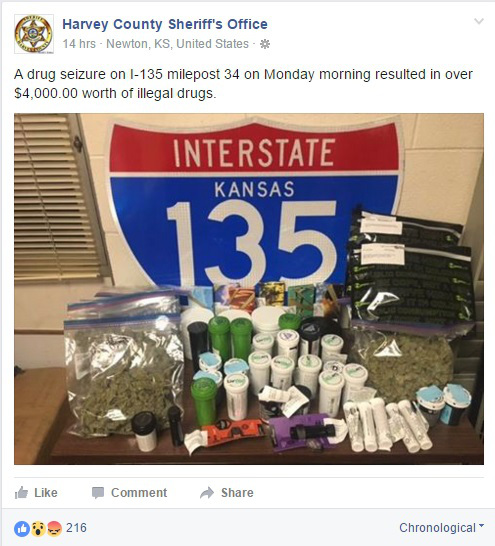 Facebook users took to both the Harvey County Sheriff’s Office’s page to express their opinions on this bust:

“Came here expecting to argue against some ignorant comments but it looks like most of the people of Kansas are waking up!”

“You mean MEDICINE!!! I’m getn Real tired of this idiocy”

“good job. Weed is SOO dangerous. Why don’t you focus more on keeping drunk drivers off the road that kill innocent people”

“The funniest part about this bust… there busting someone for… obviously legal Marijuana bought at a dispensary. … who knows maybe.. this person has cancer and was buying enough to last them for a while. .. who knows obviously if they are paying dispensaries prices more than likely it’s not some drug dealer buying it to sell it.. so yaaa!! Good job on your “drug bust” Kansas u probably have some dying cancer patient sitting in your jail cell! Don’t you feel so good about getting that hardened criminal off these here ol streets of Kansas that are falling apart and have so many pot holes in them that we could use the tax money to fix from the sell of this “so called drug” … bravo!!! U guys are so awesome. …… everyone let’s give them a round of applause”

“Meanwhile Sarah Hopkins is out on bail for supplying a known felon with firearms that killed 3 and wounded many others……#andyouwonderwhatswrongwiththiscountry?”

“This just makes me sad. Somebody is going to jail for this and it shouldn’t even be illegal. How is it a free country when the people tell the government they want something legalized and the government blatantly ignores them?”

“Love seeing pictures of how exactly my tax dollars are wasted in this state. Thanks KWCH”

“I feel so much safer knowing those hardened criminals are off the street! That marijuana leads to blindness and bad reading skills!”

“I hope you jackasses are proud of yourselves. You just threw someone in jail and took their medication away and for what? Because this state is still ran by uneducated hillbillies that see this as a dangerous drug that’s destroying everything right? There seriously is not one single good reason for this. Not one. My God, I hate this state.”

“Glad to see you’re serving the interests of the people in your state. As you can see by the comments everyone thinks you did some GREAT work”

“So was this person also in possession of the sign or is that something the police stole to be able to take this nifty pic showing where they made this ‘huge’ bust? Either way it’s illegal. But we shouldn’t be patting them on the back for making a pretty small weed bust when our state is swimming in meth. Get it together and tackle the real prob.”

“You think the cops would stop posting these dumb post becouse it is just an insult to their intelligence…..busting people for plants…..next they will say you cant catch rain water”

“Glad our tax dollars are paying to lock these guys up! Or we as a state could legalize it and collect those tax dollars…

“If it was methamphetamine, cocaine, or heroin I would say marvelous job but the resources it took to make that bust for the dollar amount it was worth was it actually worth it?”

“Probably took it from someone suffering depression or a cancer patient. marijuana has done great things for pain management. I will applaud the coke and meth busts all day long..but boo to this.”

“For once I don’t see a bunch of ignorant comments on a Ks news feed! Makes me have a little more faith in my home state!”

“Meanwhile 3,000 people flew through the construction zone on Kellogg doing 80…. Which is more dangerous? Is that weed? Uh oh, life sentence in Kansas!”

“Your tax dollars at WASTE!!! And let me guess… you are going to ruin this person’s life with felony trafficking charges, ridiculous KS tax stamp violations. Kansas is in no danger of losing its ‘national embarrassment’ status.”

“It’s weed. Nobody cares. The cops should find something better to do.”

“I feel much safer knowing my state arrested people for possessing a flower.”

“Its just marijuana people nobody has died smoking pot its alcohol meth pain pill….. it states in the Bible God give us the herb and the seed.”

“Drugs… You mean weed, Weed that ain’t hurting anyone.”

“I just wish some state legislation would take note to the comments sections when we get post from news agencies like this!”

“Was there an actual victim saved from harm here? I’m guessing not.”

“What a waste of taxpayer money. If it were legal that pot could have been sold to do more good than putting a dude who sold that pot in jail.”

“This should be legal and we should be taxing it. And no I don’t even use it.”

“Pot really……I thought they might have started cracking down on meth – heads!”

At least a few people disagreed with the majority:

“Doesn’t matter opinions about legalizing pot. Fact is its still illegal to be in possession of it and police are doing their job. Tax dollars are not waisted either for news reporting this”

“Weather you like it or not, Kansas law is Kansas law. Don’t like the laws here? Work to change them or move. It’s simple really.”