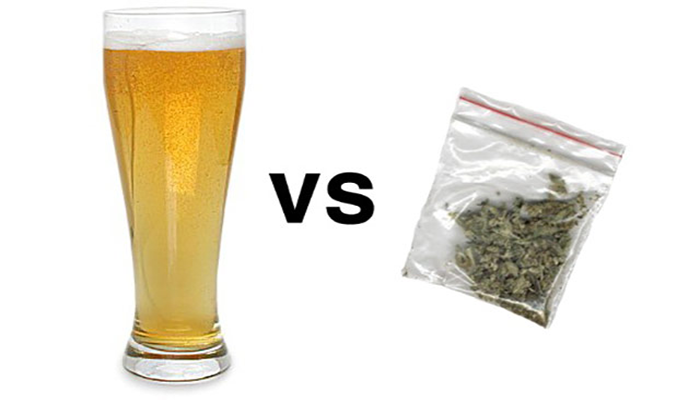 7 Reasons Why Cannabis is Safer Than Alcohol

Either directly or indirectly, alcohol is responsible for roughly 80,000 deaths per year in the U.S. alone. There’s plenty of documentation to back up these statistics. It’s difficult to find data regarding any deaths related to marijuana. There are also numerous statistics that illustrate links between alcohol and serious health conditions and also crime. It’s nearly impossible to find similar links to cannabis. 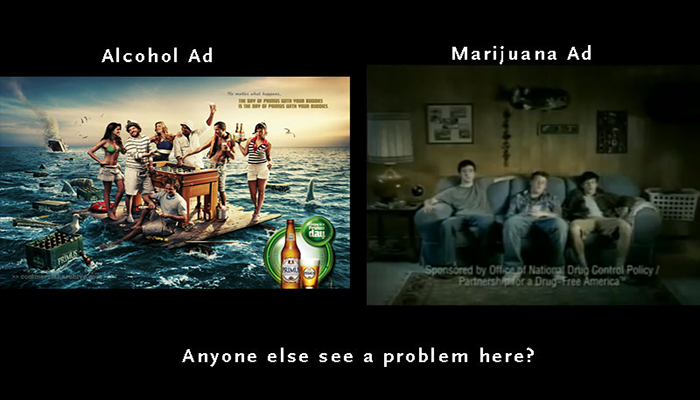 Here are seven reasons why marijuana is safer than alcohol.

1. Many people die from alcohol use. Nobody dies from cannabis use.

The U.S. Centers for Disease Control and Prevention (CDC) reports that more than 37,000 annual U.S. deaths, including more than 1,400 in Colorado, are attributed to alcohol use alone (This figure does not include accidental deaths). On the other hand, the CDC does not even have a category for deaths caused by the use of cannabis.

According to the official publication of the Scientific Research Society,  American Scientist,  alcohol is one of the most toxic drugs available. Ingesting just 10 times what one would use to get the desired effect could lead to death. Cannabis, on the other hand, is one of the least toxic drugs, requiring thousands of times a typical dose in order to lead to death. This estimate is actually theoretical, since there are no recorded cases of someone dying from a cannabis overdose. 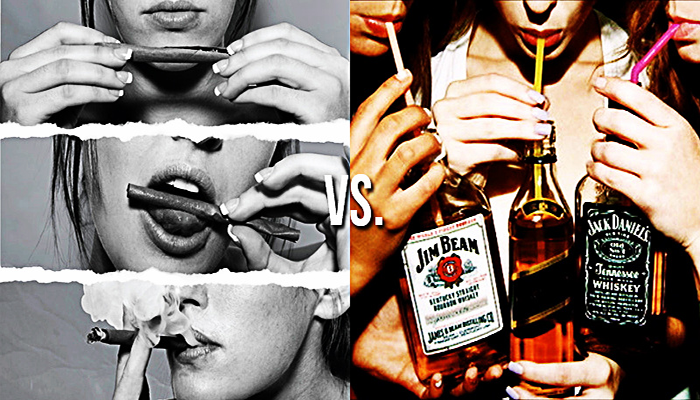 3. The health-related costs associated with alcohol use far exceed those for cannabis use.

According to an assessment recently published in The British Columbia Mental Health and Addictions Journal, health-related costs for alcohol consumers are eight times greater than those for cannabis consumers. Specifically, the average cost of health care per user due to alcohol consumption is $165,  as compared to just $20 for someone who uses cannabis. This is not  surprising, considering the vast amount of research showing that  alcohol poses numerous and significant health problems, compared with cannabis.

4. Alcohol has been proven to cause brain damage. Cannabis use has not.

Although, many of us can recall hearing for many years that cannabis kills brain cells, it turns out that a growing number of studies are showing evidence to the contrary. Cannabis actually has neuroprotective properties. Some research has shown that it works to protect brain cells from harm. Even extremely low doses of THC (cannabis’s psychoactive component) can jumpstart biochemical processes which protect brain cells and preserve cognitive function. One study showed that about a year’s worth of alcohol consumption that produced a blood alcohol level sufficient to produce intoxication decreased neurogenesis, the development of new neurons, by more than fifty percent. This  decrease in neurogenesis lasted even after several weeks of abstinence. 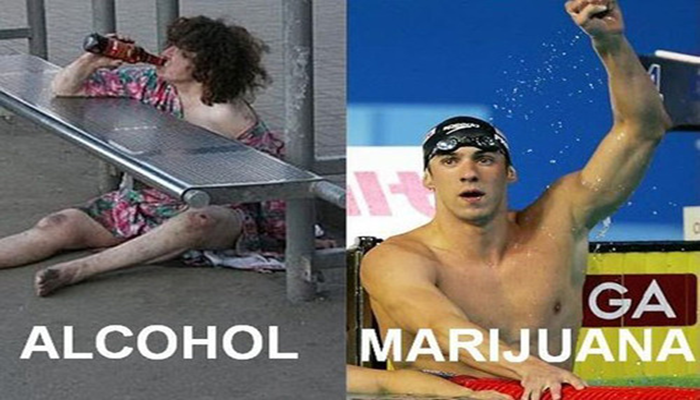 5. Alcohol use is linked to cancer. Cannabis use is not.

Numerous studies have shown that alcohol use is associated with a wide variety of cancers, including cancer of the esophagus, stomach, colon, lungs, pancreas, liver and prostate. Cannabis use has not been conclusively linked with any form of cancer. One study recently contradicted the long-time government claim that cannabis use is associated with head and neck cancers. It found that cannabis use actually reduced the risk of those cancers.

6. Alcohol is more addictive than cannabis.

Countless studies have shown that cannabis is far less addictive than alcohol based on a number of factors. In particular, alcohol use can result in significant and potentially fatal physical withdrawal, whereas cannabis has not been shown to produce any symptoms of physical withdrawal. Those who use alcohol are also much more likely to develop dependence and build tolerance. There are statistics supporting a correlation between greater availability of marijuana and a decrease in the use of hard drugs like heroin and cocaine. 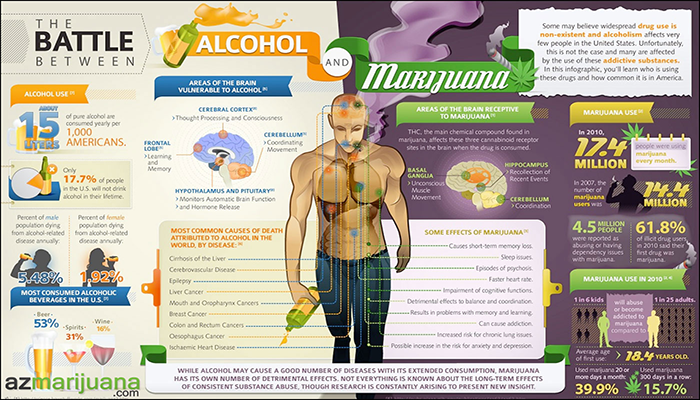 7. Alcohol use is often a factor in violent behavior. Cannabis use is not.

The news is peppered with stories of crimes committed by people who’ve been drinking. It’s virtually unheard of for someone to become violent while using marijuana. Alcohol and cannabis seem to be on opposite ends of the spectrum, with regard to  violent behavior.

When the drinks are gone and the smoke clears, I want to be this guy at 150 years old.